1001Libraires To Close Up Shop 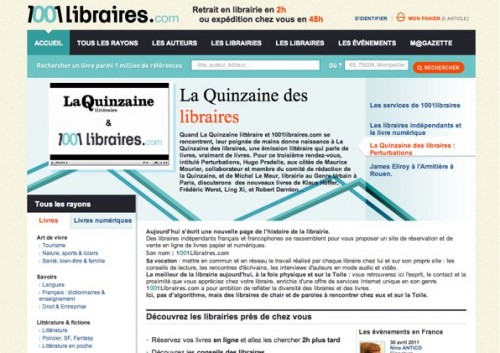 The French ebookstore cooperative 1001Libraries was launched just over a year ago as a way for independent booksellers to get on the web. Alas, after a year of discussion and development, the project has been deemed too expensive and it’s going to be shut down.

Actualitte and BuchReport are reporting that Mathieur Montchalin, president of SLF, the Union of the French Bookstores, decided this pat week that due to technical issues and rising cost, this project wasn’t worth the expense anymore.

But it was a good idea while it lasted.  The plan was to offer a white label retail website which French booksellers could customize to fit their existing online presence. It lets customers find and check the stock of their local bookstore. They can also browse from a catalog of nearly a million printed books and 80,000 ebooks.

The site also features recommendations made by real booksellers and not by algorithms, as well as some elements of building a community around each bookstore.  Booksellers can also be able to publish their own book reviews and hold discussions with readers.

But as much as some may have liked it, cost trumps everything. The planned customized websites ended up being simply too expensive,  and in any case there weren’t enough booksellers participating, so the general operating costs weren’t being covered and wouldn’t be without charging the bookstores higher fees.

BTW, while the site was called 1001Libraries, a proper translation would be 1001Bookstores. Note that there are only 296 participating booksellers now, which should give you an idea of the original high hopes and just how far they were from being achieved.

I Think it’s Time We DuckDuckWent to DuckDuckGo

WordPress.com pulled a theme last week – this is the digital publishing story no one covered