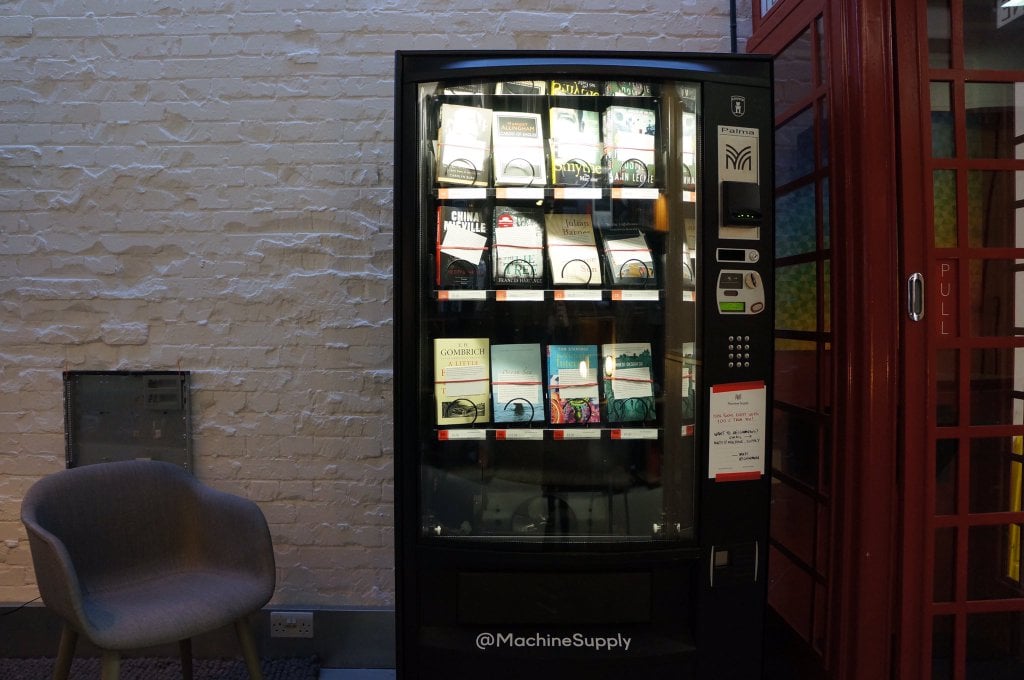 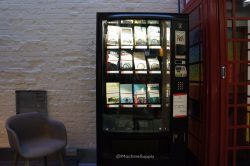 The BBC brings us the news about Machine Supply, a new web-connected book vending machine from Matt Webb.

Traditional book shops are under increasing threat from the digitisation of both the product and the market place.

But one tech entrepreneur has bucked the trend, combining the physical and the digital with a book shop in a vending machine that tweets when it makes a sale.

Machine Supply is the brain-child of Mind Hacks author Matt Webb, who explains the concept.

The vending machine was deployed about a month ago in the lounge at Campus London, one of Google’s incubators.

Those of us who can’t see it in person can follow the vending machine on Twitter (it tweets each sale, and also book recommendations) or see it in operation in the following video:

Interesting idea, but I have to wonder whether this will go anywhere.

With the first known book vending machine having been invented nearly 200 years ago, the idea isn’t new. Penguin promoted the concept during its early years (when it was still a paperback-publishing outsider), and indie bookstores have developed custom designs.

Do you suppose that is because they haven’t found their niche, or because they just don’t make any sense in economic or practical terms?

I would argue the latter. What with the prevalence of internet access, there’s no need for book vending machines any more. If you need a book, you can buy the ebook online immediately or have the paper book delivered in a couple days.

Webb, however, thinks there might be a reason for book vending machines. "I guess what I’m exploring with machine Supply is curation… instead of infinite selection, just 12 recommended books each week," he told me on Twitter, continuing in his second tweet: "that you can buy online (e-book or for delivery), or remember for later.But if you want it immediately, it’s right there."

Penguin eBooks Are Once Again Available via OverDrive

I didn’t get the kiosk in Japan, but I did find the source for the other two. I linked to them in the post.

I can certainly see these working in airports, and other places for impulse buys, but unlike something like RedBox (where the economics are based on "renting" the video) I don’t know that they would take off. Although it is always a red flag for me when someone buys into the ebooks have stalled out meme (when it is traditionally published higher priced ebooks) that have stalled out, I did think his argument that the slight improvement in book store sales might reflect the desire to read a book in isolation from the demands of other media. But…I spent the weekend swearing at the paperback I was reading (a back list book from one of my favorite authors–that has not been published in ebook form) because the print was too small, I had to break the spine to keep the pages open enough to read without my hands cramping, and as a dusty old used copy it set off my allergies). Oh how I longed for my Kindle. And what this means to me is that the very same impulse (wanting not to read on a multi-use device) is what will keep dedicated readers competitive. And of course when I look for a book I am glad to get the curated suggestions Amazon gives me in browsing categories and Also Bought lists, which are not limited to 12 books at a time. 🙂

The two comments that bemused me were, "Automating stock control – when a book is bought it sends a tweet" and "We could have them in train stations".

Many train stations already have a bookshop. Though I suppose some smaller ones that don’t might benefit from this.

Automated stock control has been happening for years by much more efficient methods than Twitter. There might be a "social" benefit but it surely isn’t progress in the business automation sense.

But having poured cold water on it . . . I hope they do appear in places that don’t have bookshops. Or maybe alongside existing ones; not least for when the shop is closed.

Curation = "buy what I tell you to buy instead of what you really want".

I don’t think this will catch on like the Best Buy vending, but at least it should make books more available in a few areas.