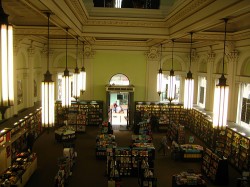 The Frankfurt Book Fair kicked off yesterday and that made it a good time for BITKOM, a German IT trade group, to release more details on the German ebook market. You might recall BITKOM from a post last week on ereader and ebook sales in Germany. Apparently they like to tease us by releasing the news in dribs and drabs.

Today’s news turns attention from the number of units sold to who who buying them. According to Bitkom’s recent survey, 1 in 9 Germans (11%) have read an ebook in the past year. That’s nearly triple the 4% who responded positively to a similar Bitkom survey in 2010.

The survey also found digital news sources lead the ebook adoptees with 13% of the population getting the news either via an app pr on their ereader, and 11% subscribing to email newsletters. Only 2% read digital comics, however, and 6% use ebooks for scientific papers or technical information.

These numbers are far lower than similar US surveys from this spring. A Harris Interactive survey from February showed that 28% of Americans read ebooks on either ereaders or tablets. The Pew Center also reported earlier this year that 19% of Americans owned ereaders, nearly double the number reported in July 2011.

But there is one important detail which separates the US and German ebook markets; in the US Amazon has been disrupting the market since 2007. Amazon only turned their attention to Germany in 2011.

Well, the major difference between the American and German book market is the availability and pricing of native-language books.

Most German books are not available as ebooks. It’s getting better with new released titles but the publishers are _very_ relucant to make their backlist available in electronic form.

The price: ebooks are expensive in Germany. The sales tax for ebooks is 19% versus 7% for paper books. As the publishers don’t really want ebooks (they’re destroying their cosy market niche) they put rather high prices on the ebooks (usually 0-25% below hardcover price). And the agency pricing (Buchpreisbindung) makes sure that there are no discounts.

Oh, I forgot the PS: BITKOM is not a trade group, it’s a lobbying group. Be careful with statistics from them – they are all biased.

In the US trade groups are lobbying groups. It’s assumed that they will hire lobbyists.

With all the mindless distractions via the internet, if a person reads a whole book cover to cover (paper or otherwise) during the course of the year, are they not above the national average?