I just sold an ereader from my collection today.

If you know me from MobileRead, then you also know that I have a rather large collection of ereaders. As part of my collection, I have 5 of the Sony Data Discman. If you’re wondering WTH I’m talking about, I don’t blame you. I didn’t know these devices existed until I happened to come across one on Ebay.

You might recall that before the Sony Reader PRS-500, Sony  also had an ereader called the Sony Librie. It was only sold in Japan, and it was a horrendous failure largely because Sony couldn’t provide enough content (and wouldn’t let you create your own). But the Librie isn’t Sony’s first ereader. That honor goes to the Data Discman.

Sony first released the Data Discman in Japan in the year 1990. They were later introduced into the USA in 1992 (and at least one model was sold in Europe). Several dozen different models were produced, and they were priced around $600 and up. Here’s a picture of one of the first: 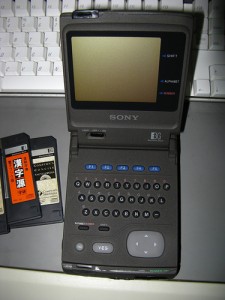 The screen is monochrome, and rather low in resolution. As you cann see, there is a keyboard, d-pad, and several more buttons. Do you want to know what media it used (I hope you’re sitting down)? CDs. Yes, the Sony Data Discman used a 3.5″ CD. Here is a different shot of the same model: 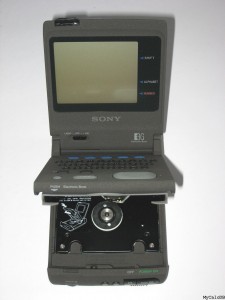 Earlier this week, I found someone who is still using his DD-20. At least, he was using it until it died a few months ago at the age of 18 (in gadget years, which is ~googol human years). I have one, and even though it’s not fully functional, it works well enough that he can use it.