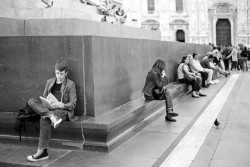 The real title for this session is “I’ll never pay more than $9.99 for an E-book!”, but that doesn’t work quite so well. The presenter was Michael Norris, senior analyst for Simba Information, an independent research house based in Connecticut.

The first thing he told us was that when you look at survey data, be aware of bias & out of context information. (Well, I thought this was rather obvious, but given how some report survey data without really thinking about it, maybe not.)

Norris also doesn’t believe any of the future projections he’s heard because he knows that new tech will probably come out in the mean time. He next said that the consumer has a different relationship with a book than with any other media. If someone goes on iTunes and buys 10 songs, there’s a good chance they will listen to all those songs that night. But if someone buys 10 books then those books might never be read. People buy ebooks for really boring reasons. For example, his wife uses Kindle4iPhone because she already has an iPhone and doesn’t want to carry anything extra.

Simba has run this survey twice. The first was in January 2009 and the second in January 2010. The survey group was all US consumers, and responses came from across the nation. They started with really basic questions, and then built up to the more detailed ones. He didn’t share all the data (it’s for sale), but here is something they learned:

He also showed some of the data that Simba got from their partner Simmons Market Research. It turns out that the number of people who buy just a few ebooks a year is similar to those who buy just one or two paper books.

One last piece of data: the most popular ereader is a PC. I’m not surprised; that matches with other market data I’ve seen.

All in all, this was a session worth attending.