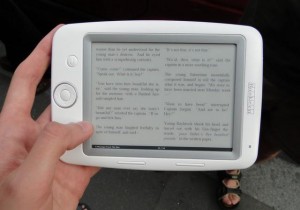 The Bookeen Opus came out in the Fall of 2009. I tried one in October and was so dissatisfied that I sent it back. There were any number of things the Opus couldn’t do (then) that I required in an ereader: Mobipocket support, instant on, dictionary support. I decided to do this review because I had been told that Bookeen have significantly improved the firmware. This is true. The Opus has changed for the better.

The Opus has a 5” E-ink screen. It has 2 page turn buttons to the right of the screen and a d-pad & 2 buttons below the screen. One the bottom edge it has a USB port, and on the upper edge it has a power button and a microSDHC card slot.

The Opus was too small for me. I did eventually get used to holding it, but it still feels too thin and too small. I know several people who disagree with me, so I might be the odd man out.

The Opus is unique in that it has 2 firmware options. The first provides support for Adobe DE DRM, and the second supports Mobipocket DRM. I spent far more time with the Adobe firmware (the Mobipocket firmware was delayed, repeatedly).

For the longest time I was dedicated to the Mobipocket format, and you’d think that I’d be happy to get back to it. Well, the Adobe firmware is noticeably better. I tried the Mobipocket firmware just long enough to right down its abilities.

The 2 firmwares have the same Library options. You can show 5, 10, or 20 items per page. You can view all your ebooks as a single level collection, or you can view them by folder. The Opus has 4 sort options: file title, size, date, name, and path.

When you’re reading an ebook on the Adobe DE firmware, you have a choice of 3 different font, 12 font sizes, and you can justify or embolden the text. But you don’t have a dictionary or bookmarks. With the Mobipocket firmware you have the 12 font sizes, 3 font choices, dictionary support, and bookmarks. Also, the Mobipocket firmware is stuck with full justification (I hate it) and a large empty margin around the screen.

The Opus is a nice ereader. It’s well designed and solidly built. Bookeen are now on the third generation of firmware for the Opus; I think they’ve found and fixed all the bugs. I’m glad that Bookeen added a sleep mode; this was one of my 2 chief complaints when I got an Opus last fall. I thought that the lack of a sleep mode went against the very concept of the Opus. It’s obviously a pocketable ereader, and what is the point of putting it in your pocket if you can’t pull it out and turn it on in a second?

I could recommend this ereader to anyone.

This review was originally written several weeks ago, and was delayed for various reasons. The cause of the delay doesn’t matter, but what does matter is that just last week Amazon and B&N dropped the price of their ereaders. All of a sudden you could get (at least in the US) a Nook or K2 for about the same price as the Opus. These ereaders are much more capable than the Opus, and I think they represent a better value.

You can buy the Opus direct from Bookeen. Prices vary depending on the market. You can also buy the Opus from one of the 50 or so resellers you’ll find on the Bookeen website.