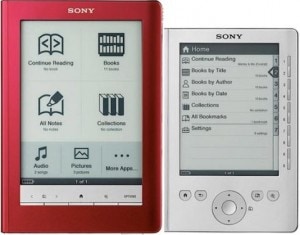 Igorsk posted over at MobileRead that the new version of the Soy Reader Library s now available for download. Some of the improvements listed on the download page include:

He also reported that the XML config files also mention the PRS-950. I haven’t found it myself, but I will take igorsk at his word.

I guess this means Sony really is going to try to compete with B&N and Amazon. I wish them luck, but I frankly don’t see them lasting much longer.