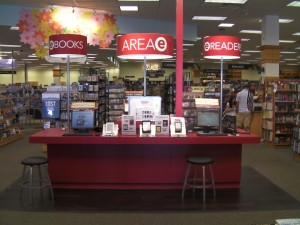 I read over on Mike Cane’s blog that his local Borders had their Area-e setup, so I took a break from my errands today and stopped by the nearest Borders.

There was so much FAIL that  don’t know where to begin.

The much vaunted Area-e consisted of one fixture with 4 computer terminals and 3 ereaders on display. The first fail is that this display isn’t a new addition; it replaced a virtually identical display. The old one was in dark colors, not red, but that’s the only difference.

It’s not designed to display multiple ereaders; heck, it wasn’t even doing a good job with just the 3 it had. I double checked with the press release, and Borders boasted that they would have over a dozen models. Where are they planning to put them?!?

There was a Cruz Reader on display, which brings up another fail: It wasn’t charged. They put their how new product on display without bothering to read the documentation. What’s worse is that they didn’t know why it wasn’t working until I told them (it won’t charge off USB).

And this brings up the third fail: the so called expert didn’t know anything about ereaders. In the 10 minutes I listened to her help a customer, she was _wrong_ no less than 5 times.

P.S. Here is the backside in case you’re interested: