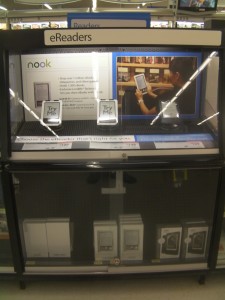 I took a few minutes out of my schedule this morning to visit Walmart and check out their new ereader display.  I was hopig they would expand the section, but instead Walmart merely replaced the Sony display with the 2 Nooks and the Kobo Wifi.

I wouldn’t want to be Sony right now; in pulling the Sony ereaders Walmart were saying that Sony aren’t important enough to have in stores anymore. Ouch.

Kobo ereaders aren’t showing up on Walmart’s website, but as you can see the Kobo Wifi is in stock and selling for $129. I didn’t see any boxes for the original Kobo, though.

And yes, both Nooks are on display – in a locked case. I think the big “Try Me” screen saver is a particularly nice touch.