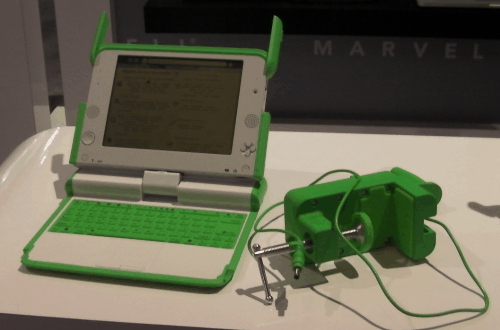 I finally made it to the Marvell booth Saturday night to get a look at the green and white wonder boy. 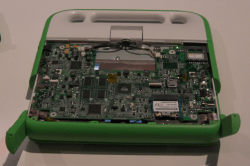 The XO-1.75, with its 8.9-inch touchscreen, will start shipping in the second quarter of this year to countries around the world trying to bring schoolchildren into the computer age. It looks the same as the existing 1.5 and 1.0 machines; it has the same Pixel Qi display, Flash storage, and keyboard (actually, there are 2 keyboard options) The only difference is that it replaced the x86 CPU with a Marvell Armada running at 1GHZ.

Actually, that’s not completely true. Replacing the CPU means they had to redesign the entire motherboard; it’s not as simple as swapping just the CPU. But you won’t be able to tell that without cracking the unit open.

OLPC had the hand crank generator on hand; you can use it to recharge the 1.75 in about a couple hours. BTW, I asked about why it wasn’t included with the XO-1. Apparently the demo unit kept getting broken, and it took too much time to charge the XO-1 (because of the x86 CPU).