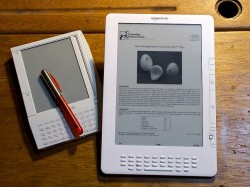 I found an interesting blog post on Inside Higher Ed yesterday where the author discusses what he thinks Amazon should do to regain their standing in the academic market. He makes a number of points, both good and bad.

I happen to think he’s wrong in his basic premise, actually. The Kindle will never be a decent textbook platform; it lacks core hardware and software features needed to be used in a classroom. Basically, E-ink doesn’t refresh fast enough and you can’t have several ebooks open at once.The various Kindle pilot programs last year gave us an extensive list of what the Kindle can’t do.

But let’s set that aside and focus on the points raised in the article.

At some point, book buyers (like me) will stop buying digital books from Amazon if we can only read our books on Amazon’s ereaders

This would be a concern if not for the fact most people don’t seem to care. Kindle ebook sales are trending up, not down. Also, in making this point he ignores the fact that you can also read Kindle ebooks on Android, iOS, OSX, and Windows.

The Kindle is less valuable, less useful, if I can only read Amazon purchased books. I want to be able to purchase books from Google and from Barnes & Noble.

I could just let this one speak for itself, but I’d rather skewer him. Is there an ebookstore with titles you can’t find in the Kindle Store? Google, perhaps, but I seriously doubt that anyone else can make the claim. Also, since you can have multiple apps on your gadget (PC, iOS, Android), does it really matter which app opens the ebook? Amazon can afford to lose the handful of sales due to ebooks they don’t carry. Their prices will bring you back on the next one.

This isn’t something Amazon can change, so there’s no point in proposing it. Ebook lending is being blocked by the copyright holders, not Amazon.

This is an excellent idea. Amazon really aren’t putting any effort into getting digital coursepacks into the Kindle store. It’s an untapped market segment which is could be larger (in $) than the textbook market. (Actually, I’m not sure they’re in anyebookstore. Mist look into this.)

I don’t think the market’s there. Everyone’s been talking about ebook bundling for the longest time now, and yet few are doing it. Also, what is the value in bundling an audiobook when the Kindle has TTS? It’s not as good, no, but it doesn’t cost anything extra.

This is another good idea, but it needs to be expanded to schools and other institutional buyers. They’re valuable not just because of how much they spend, but also because each library with a loaner Kindle is a floor model Amazon didn’t have to pay for with a sales staff Amazon didn’t have to hire. There’s no downside for Amazon.