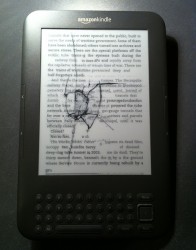 The Kindle finally got library support yesterday. This was an ability that Amazon could have had at launch, except (for some reason known only to them) they didn’t want it.

As I was thinking about Amazon’s decisions to limit what the Kindle could do, I was reminded about an upgrade Amazon could have had if they wanted. They passed on the opportunity to upgrade the Kindle file format before it launched.

As you probably know, the Kindle file format is virtually identical to Mobipocket (Amazon bought Mobipocket in 2005). Aside from a few extra twists in the DRM, Kindle does everything the exact same way as Mobipocket. This would be fine except that Mobipocket is based on an old version of HTML. When the Kindle launched on 2007, that HTML support was an antique and it’s only getting older.

Amazon has always maintained that the 2 formats are not the same, so they really could have added support for a better file. Sure, keep support for Mobipocket, but also give the new device a chance to really pull ahead of the pack. The original Kindle had the hardware to support the format, too, so it was really just  matter of writing the code.

Amazon can’t update the file format now; it’s far too late. There are millions of  still functioning K2 and original Kindles out there that Amazon don’t and can’t provide updates for.

But if they had, do you know what it would have meant?

Amazon could have released their own variation of an Epub file before anyone else.

P.S. Did you know that Amazon have been hiding Epub inside some Kindle ebooks since last September?  It’s been debated ever since the detail was discovered, and the consensus is that Amazon is getting ready for a switch to Epub or, in my opinion, some other kind of improved file. They could have taken that step back in 2007, but didn’t.

P.P.S. If you want to look for the Epub contents of a Kindle ebook, here’s how. Take a recently released Kindle ebook and try to open it with WinZip or some other utility. Often times this app will find the beginning of the ZIP file and open it for you.

image by Chris Walters of BookSprung