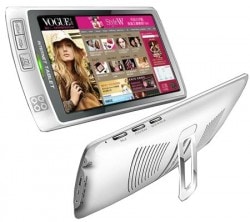 Today I decided to pull my first tablet out of the closet for a retrospective.

It was pretty much the only cheap tablet on the market in 2009, which is why I bought one.  Remember, this was before the ereader price war, before the iPad, and before the Android tablet explosion of 2010. It was a decent device for its day.

The original firmware was based on a basic Ubuntu build with little to separate it from the standard desktop install. It wasn’t all that easy to use, and you had  to be fairly skilled as a Linux geek if you wanted to install anything or change any settings. But the later firmwares gradually fixed the shortcomings and by the time the fifth firmware (early 2010) rolled out this was a pretty good Linux tablet.

There was also optional Android and WinCE firmwares, but I never really got into them. Neither firmware worked all that well, and after seeing the Linux firmware get updates while these were ignored, I lost interest.

It shipped with an out of date version of FBReader, and it worked just fine as an ereader. BTW, FBReader released an official version for the SmartQ devices back in February 2010. It’s worth getting if you have this tablet.

I’ve reviewed this tablet before, in early 2010. It was a decent value then but I wouldn’t recommend that anyone get it now. It’s not just that Honeycomb is coming (although you can run v3.0 on a NookColor); you have so may good options now. There are a bunch of Android tablets on the US market that are cheaper and locally supported. Trust me, that matters.

The SmartQ 7 also isn’t all that capable by today’s standard. It works okay, but it’s really only as good as your ordinary $150 Android tablet. And it doesn’t have the software support that Android does.

P.S. Here’s a photo of my SmartQ 7, with the Pocketbook IQ on one side and the 7″ black Pandigital Novel on the other. It weighs only slightly more than the other 2 tablets even though it was noticeably thicker. 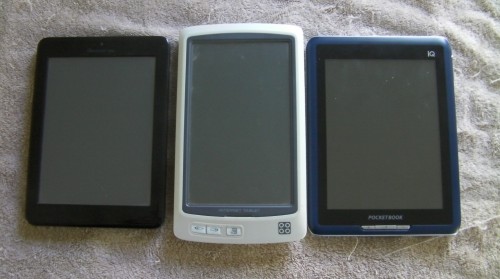