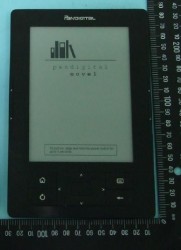 Pandigital secretly hates me. That’s why they keep releasing new ereaders all under the same model name.

This unit is based on a 6″ Sipix (I think) screen, and it has Wifi, 2GB Flash storage, and a microSD card slot. It’s tied to the B&N eBookstore and you can buy ebooks from the device.

It’s not clear which screen it’s using, but the paperwork does mention that this ereader was designed by Qisda. I also found a mention in the manual of a touchscreen. Put the 2 together and the screen is probably a Sipix screen, not E-ink. So far as I know Qisda have only developed ereaders with a Sipix screen.

There’s no word on when it will be released.