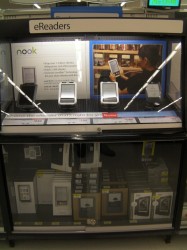 Walmart started carrying the Kindle this week and they did exactly what I expected. The Kindle is locked up in a display case with the other ereaders.

The picture at right shows the same ereader display case that my local Walmart store has always had. Up until last year the case contained Sony Reader. They were replaced by the Nook, Kobo Wifi, and later the NookColor, but the case has always been in the same place and it’s always been locked down. Now it has the Kindle 3G and Kindeal (Kindle special offers).

And in case you’re wondering, the Kindles are the brown boxes on the bottom shelf. You know, they’re the ones you can’t see because they’re in the shadows. Yeah, that’s gonna sell great. (at least the others are in white boxes.)

My point here is that Amazon boasted that the Kindle would be on display in most stores. I seriously doubt that will happen; Walmart haven’t overhauled the ereader display. Everything is still locked down.