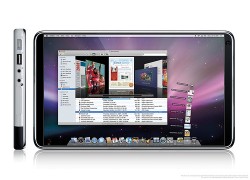 I was using Google Images this morning when I came across some of the old unofficial iPad concept designs that floated around the web back before the launch of the iPad.

What’s this, you say? There was a time before the iPad? Blasphemy!

No, really, up until about 18 months ago the iPad was only a myth. (When it comes to technology, that is ancient history, I know.) I thought it would be fun to dig up a handful of the – well, I’m not sure what to call them. I think chimera would fit. It was a faked creature made from parts of others, and that fits the iPad concepts pretty well.

The lead photo is my favorite and it’s the one I wish had been released. I call it a MacPad. Here’s a gallery of other examples of wishful thinking, as well as one photo of a (probably) faked iPad Mini.