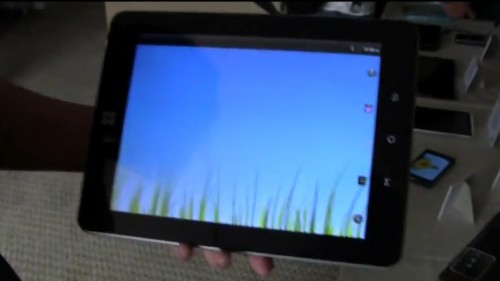 Nicole of NetbookNews got her hands on Smart Devices’ newest 9.7″ Android tablet, the Ten. As you can see from the video, it’s a rather basic looking tablet.

I’ve actually seen some details on this before, so I wasn’t surprised to learn that it’s running on a RockChip CPU and has a 9.7″ (1024×768 resolution), g-sensor, ambient light sensor, Wifi/Bluetooth, GPS, and optional 3G. It’s running Android v2.2. Nicole also confirmed that it is indeed using a piezoelectric touchscreen, just like Smart Devices reported back in February.

The touch screen tech on the Ten enables multi-touch with bot fingertip and a stylus, and that should open up some interesting possibilities.