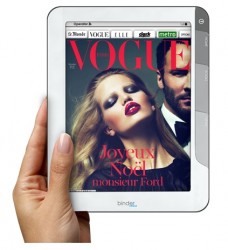 But they managed to keep it very quiet. BTW, Sagem Wireless changed their name to Mobiwire back in February, so I’ll refer to them as such.

I don’t have full details on the story just yet, but I do have a back channel confirmation that Mobiwire did indeed file for bankruptcy at the beginning of May. (I have to admit that I missed the story at the time, but then so did most people.)

Mobiwire look to be primarily a designer of OEM equipment. Their website shows a wide selection of interesting looking phones, and even a few ereaders.  The one at left is the Chromer 6. It never hit the market, but its 6″ color E-ink screen does show that Mobiwire were pushing ahead.

Mobiwire did release an ereader to the European market; it’s called the Binder. It was rebranded as the Thalia Oyo and the Fnac Fnacbook. The Binder looked much the same as the Chromer6 pictured above, only it had a 6″ Sipix screen (grayscale).

The Binder was not a terribly successful design, and its poor market performance may have hurt the company. Last month I told you that the Fnacbook only sold 14 thousand units since it launched late last year. The unfortunate part there is that I’ve also been told Fnac had signed a deal to buy 100 thousand. That’s a fair amount of money that Mobiwire could have used.

The latest news with Mobiwire is that several of the management are trying to make a buyout of part of the company. My guess is that it won’t be the ereader section.