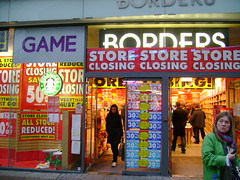 Apparently the post I wrote early today had jumped the gun, because it wasn’t until this afternoon that the liquidation  became official. Judge Martin Glenn of the U.S. Bankruptcy Court in Manhattan signed off on the plan around 3 this afternoon.

Everything is going to be sold off, including the remaining stock, fixtures, brand name, URL, everything. The liquidation sale is expected to bring in between $250 and $284 million, which is a far cry from the $215 million in cash and $220 million in assumed liabilities  that Najafi had offered for Borders. The Najafi deal fell through due to objections by some of borders’ smarter creditors.

With some luck, not all the stores will close. Books-A-Million, which will soon be the second largest bookstore chain in the US, have offered to buy between 30 and 35 Borders stores. the deal is still being worked out. (Why only 35 stores? Because they have the good sense to expand slowly and thoughtfully. )

I’m still waiting to hear what will happen to Borders’ ~11% share of Kobo.