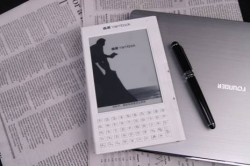 The Sina Tech news blog reported earlier today  that Baidu, China’s home-grown version of Google, now own about 40% of Fan Shu, maker of the Yambook ebook reader. Details haven’t been confirmed, but the deal is reportedly worth 47.6 million yuan ($7.4 million USB).

Fan Shu have a number of different Yambook models on the Chinese market, with specs ranging from Wifi to 3G. They also have their own ebookstore as well as a PC and Android reading apps. The Baidu deal would value Fan Shu at 120 million yuan.

IMO this rumor is very likely true. A couple weeks ago Baidu signed a distribution agreement with a number of Chinese publishers that gave Baidu the right to sell their ebooks. The deal legitimized Baidu’s Wenku  books portal, which had previously been accused of wide-spread piracy.

Baidu are clearly making a push into ebooks. Buying Fan Shu would be a good way to bring the new content to market in the minimum time.