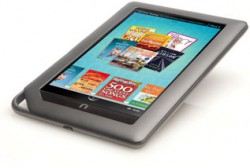 For the second week in a row, Barnes & Noble are offering a refurbished NookColor ebook reader for $189+shipping. You can find the deal on B&N’s outlet page on Ebay. It comes with 1 year limited warranty and 90 days tech support.

About a month ago I noted that B&N were selling the NookColor on Ebay for $190. Now it’s $180, so it seems my prediction was correct.  They are dropping the price a little bit at a time.

The last time we saw this kind of pattern (incrementally selling refurbs for less and less money) from Barnes & Noble, they released the Nook Touch a short while later. I’ll bet dollars to donuts that they’re doing it again.

Some time this fall B&N are likely to release a new ebook reader. I don’t know the specs but I will bet that it’s coming.