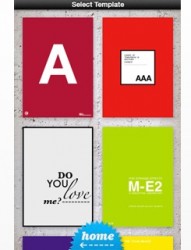 A rather interesting iPad app made the rounds a few weeks back, and I’ve been meaning to write a post about why I’m never going to get it. (I’d be better off hiring a pro.)

It’s called Phoster, and when it came out last year it was pitched as a way to make cards, posters, and signs.  The reason it got attention a few weeks ago is because Piotr of Password Incorrect discovered that he could use it to make covers for ebooks. It works quite well, and I was impressed with the covers Piotr managed to make.

But here’s why I won’t get the app: I have little artistic talent and (more importantly) no training. I know that I couldn’t do a good job at designing a cover – not nearly as good as Piotr.

I would be better off spending a few hundred dollars on one of the crowd-sourced design sites instead of parting with the $2 for this iPad app. Whoever ended up with my money would almost certainly have more artistic skills than me and thus would make a better cover.

This post went on my “must write it eventually” list because of a twitter conversation I had back when I first learned about Phoster. Someone was telling me that all indie authors should get this app. She works for a major ebookstore, and she’s seen her share of terrible covers. She wanted everyone to use this tool to make better covers. I disagreed with her.

As I told her at the time, just because I can buy the tool doesn’t mean I have the skills to use the tool properly.

Here’s the larger point, and this is why I wrote the post: Just because you’re self-published doesn’t mean you have to do everything yourself. It’s perfectly okay to hire someone to perform a specific task (design the cover, edit the manuscript, etc). Self-publishing has to do with the fact that you control your book; not the person actually doing the work.

Whether you are in traditional publishing or self publishing, the fact remains that it is a business. It’s worthwhile to pay for the best quality work you can afford. That will help you sell more ebooks and make more money.

P.S. And yes, I know I should heed my own advice. My site is not as well designed as it could be. It dates from a time when I had neither money nor skill, and at this point I still don’t have much of either.