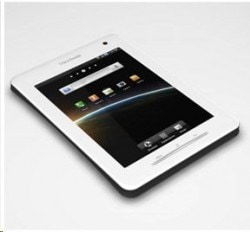 Viewsonic  have decided to come out with another budget tablet, and it looks strikingly familiar.

Details are scarce on the ViewPad 7e, but it is known that it has Wifi, Bluetooth, HDMI out, and it will be shipping with the Kindle app pre-installed. If you look at the promo image at right, you’ll see that it also has what looks like a camera in one corner.

It’s going to be running Gingerbread, and the retail has been set at 169 euros. We’ll probably see it in the US for about $169. The ViewPad 7e is due to be unveiled at IFA-Berlin 2011, which starts a couple weeks from now.

We won’t know for sure until someone cracks the case, but I think this bears a striking resemblance to the Pandigital Nova, another budget tablet. That could be a good thing; the Nova has pretty decent performance for the cost.