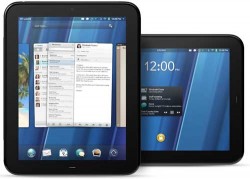 I finally got tired of waiting to hear from HP on my TouchPad order , so a few minutes ago I called and got an update. I was told that the order was safe, but that they were waiting to receive stock in the warehouse. They don’t expect to ship my order until the end of this week or the early part of next week.

Now, the interesting part here is that I placed my order Saturday night and it’s going to be at least another week before I get it. Obviously  HP received so many orders that night that they still haven’t filled them all. It sounds like they’re actually still waiting to get my units from the factory.

I’m pretty sure that this means that HP won’t be taking any orders until Friday. Even if they do, they won’t have all that many left to sell. But even if they do have more units, HP still won’t be able to ship any of the TouchPads they sell this week until they fill any outstanding orders.

I really don’t think we’ll see HP selling anymore TouchPads . In fact, I’m not going to bet on seeing them on sale anywhere.