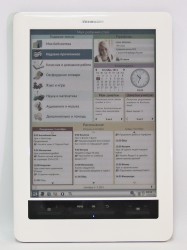 The Moscow International Book Fair will be opening Wednesday morning, and Ectaco will be there. They’ll be showing off all their ebook readers, translators, and other gadgets, but most importantly they will have the Jetbook Color on display.

This is the same basic device that I mentioned a few weeks back, only this one has been localized for the Russian educational market. Like the US version, it has a number of educational apps that were developed in partnership with Russian schools.

Ectaco have designed the Jetbook Color to be the only device a student will need. It comes with a schedule guide, a test-taking app, training manuals for each grade, graphic, accounting, and scientific calculators, and a pronunciation dictionary.It also has an illustrated dictionaries for 36 languages and a translator for 180 languages.

The Jetbook Color is based on the newly available color E-ink screen, which was first shown off at CES 2011 (specs). It’s using a 9.7″ screen, to be exact, and it’s the same size screen as the Kindle DX. The Jetbook Color also has a Wacom touchscreen, Wifi, a microSD card slot, and optional 3G. It’s running on an 800MHz CPU and weighs about 550 grams.

It’s selling in Russia right now and the retail price is 15,000 rubles (~$506 USD). That’s around $150 more than the US price. You should be glad that there’s so much competition here, otherwise the US price would also be that high.

The US model won’t be shipping until December.