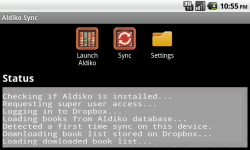 I’ve just come across a new counterpart to FBSync, the FBReader syncing app.

Aldiko Sync is designed to help you update all your Android devices. Do you use the Aldiko reading app to read on a tablet and a phone? You can install this app on both devices and use it to make sure they have the same library of ebooks, annotations, and so on.

It actually works a lot like FBSync. It syncs the data with Dropbox, which means you don’t have to have all the Android devices online at once. It was just announced today and it should probably be considered as beta software. It might crash so be careful. You can find it on MobileRead.

BTW, if you use Aldiko to read DRMed ebooks, you might want to make sure that this tool doesn’t sync the actual ebook files across devices. The ebooks are locked to specific devices and might not work after they are moved.

The app requires that you run Android v2.2 or above, which isn’t much of a problem considering that the current Aldiko app itself requires Android v2.1. Most Aldiko users will also be able to use this app.

They will also need to be using a rooted Android device, and that might be a problem. You see, most Android tablets have to be hacked in order to get root access. Do you want to install a firewall, have 2 apps use each other’s data, or do some otherwise ordinary computing tasks? Then you’ll need to get what is basically admin level access by rooting your device.