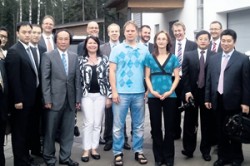 Two Finnish universities and a Shanghai based research group have formed a partnership last month. They plan to cooperate in the development of a new class of gadgets designed to solve a problems afflicting parts of rural areas of China. Not only do some areas lack reliable power, they also lack reliable communications. The new ebook reader will address this.

The Helsinki Metropolia University of Applied Sciences, Aalto University and the National Engineering Center of Digital Television (NERC-DTV) plan to make a low-power, reception only device based on an E-ink screen. The screen and general hardware design are expected to cheap and require minimal power, and that should make it possible to power the ereader completely from a solar panel.

“The solution of combining the broadcasting technology with the e-paper technology will greatly reduce the cost of paper distribution,” says Wang Yao, vice-president of NERC-DTV. “The digitised paper will be compressed and broadcast wirelessly, and received and displayed by cost-efficient e-paper technology-based terminals. The system will not only be an economic solution but a green one as well. This is a kind of revolutionary system. We believe this green and efficient solution will be the trend of the future.”

It’s not clear, though, exactly why low-power is one of the original goals. Given that they’re not concerned about being far from a power supply, perhaps it might be better to drop the E-ink screen in favor of an even cheaper LCD screen.

But since it will have an E-ink screen, there’s a chance that it might look like the device at right. This is a concept design developed by Holly Gates back in 2008. It’s called SNIPPY (Solar Networked Integrated Information Propagating Paper-like displaY), and it fills most of the requirements of the project discussed above. The concept unit had Bluetooth, not the TV connection that is planned for the Finnish-Chinese project device, but that’s a minor nitpick.

Of course, it’s been about 2 weeks since the Finnish story was published in the Helsinki Times, so there’s a very good chance that at least 1 Chinese gadget maker has already read the article, developed the ereader and started shipping it.