Skip to content
Google have just opened their first store within a store this week. They’ve worked out a deal with the UK based gadget retailer PC World and they’re going to be leasing a small part of PC World’s stores and using the space to promote Chromebooks and ChromeOS.

They’re calling it the Chromezone, and it’s going to work something like the Apple spaces you can find in Best Buy. The real purpose of this space is to give potential customers a chance to finally see what a Chromebook looks like in person.

Given that the tactile experience is often more effective in selling a product than online stories, this is something that Google really should have done some time ago. In fact, Google’s own sales stats support this. 90% of sales from the Chromezone are to people who bought in store and not online. 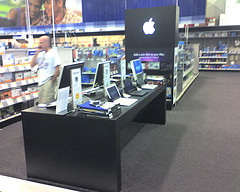 Yes, the space is a lot smaller than Apple’s own retail stores but this is also Google’s first experiment in retail and in providing 1 on 1 customer service. The Chromezone is also on par with the amount of space given over to Apple products in a Best Buy store. It’s actually bigger than some of the Apple areas in BB stores.

Can you imagine what it would be like of Google opened a retail store built in their own image?  I can.

It would be an 8 story tall window-less white cube with multiple entrances for the vast number of departments. Whatever is Google’s latest and greatest product would be accessible from the front door and you’d be able to find the unloved and soon-to-be-cancelled products off a back alley (feedburner, for example). Periodically throughout the shopping experience you would be asked to leave and reenter the store. Every time you enter your name will be checked against Google+ and if you don’t give a valid one you will get banned from all of Google Store.

—
For more gadget news, subscribe to the RSS feed or the daily email newsletter.