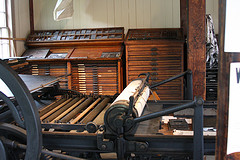 About 5 months ago I introduced you to Paperight, a new startup based on an unfilled need in the print on demand market. Back in May all I could talk about was the idea, but over the weekend I learned that Paperight had launched a couple weeks back. The website is now up and running, and they are currently testing the system with a handful of titles from EBW Healthcare,  a textbook publisher.

Paperight is based on a simple but incredibly useful idea. What is a publisher to do when they have a potential customer in another country? They could ship the book, but that’s often times too expensive. They could also sell the territorial rights, but there’s no guarantee that someone would be interested in buying. And that is where Paperight comes in.

The Paperight system is designed to act as an intermediary between publisher who wants to support the markets outside their reach and the print shops that are local to those market. Publishers submit a PDF of each file as well as a cover image, metadata, and pricing/royalty info. Participating print shops can print the book, pay the required fee, and then charge what they feel is a fair market price for the book.

In function, it is similar to the system that On Demand Books developed to support the Espresso Book Machine (only without the incredibly expensive hardware). Neither the publisher nor the printer need to know where the other is operating (so long as the regional rights are respected).

Paperight chose to standardize the books on the A4 paper size (it’s slightly longer than an 8.5×11  sheet). Publishers can either specify a 2 column landscape or a single column portrait. There’s also a section of each page which is left  blank in the hopes that the print shop can sell advertising.

The beta is limited to South Africa (that’s where they’re based) and it’s limited to just the one publisher. But Paperight is hoping to expand the platform both in South Africa and worldwide. They’re currently looking to sign publishers and print shops anywhere and everywhere.

This is one of those low-cost, high-benefit ideas  that wouldn’t be possible without the internet. (It almost make up for the web being full of spam and annoying advertising.) I’d like to see it expand beyond South Africa. Depending on the pricing structure, Paperight might be a creditable challenge to the major POD services like LSI. They could serve areas that just aren’t worth the expense, otherwise.