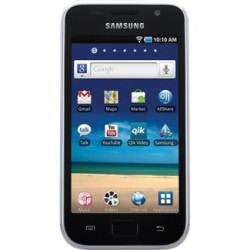 Samsung’s latest 5″ media player is about to hit store shelves in Europe, but it’s only just begun to ship here in the US.

I’ve been watching the Galaxy Player since it was unveiled back in February (video), I have to say that the specs do not disappoint.

The Galaxy Player is based on a 5″ (800×480) capacitive touchscreen, and it’s running the latest version of  Android Gingerbread on a 1GHz CPU. It has Wifi, Bluetooth, GPS a pair of cameras, speaker & mike, microSD card slot, and 8GB Flash storage.

Samsung are boasting that the Galaxy Player has impressive video and audio support, as well as access to the Android Market. It also ships with a full suite of Google Apps, Youtube, and there’s special emphasis on Skype being available through the Android Market.

Samsung is hoping that you’ll decide to replace your phone with theGalaxy Player ; that’s why it has the speaker, mike, and Skype. It seems to me that they took a phone and simply swapped out the 3G chip.

I was a little surprised to see the price; that’s a little rich for my tastes. It’s also a lot higher than most Android budget  tablets. Sure, the Galaxy Player  will likely have a better build quality, but there’s something to be said for a larger screen size.