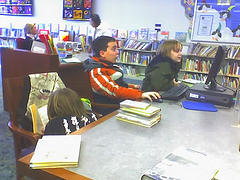 It’s been a stellar year at OverDrive, with total ebook turnover looking to hit 16 million checkouts, which would be triple that of 2010. They’ve also seen a near doubling of new users signing up, with nearly 2,000,000 already joined this year. Those new users have also added to a spike in installs for OverDrive reading app; there’s now over 9 million copies of the OverDrive Media Console in use, including over 2 million on iOS and Android.

OverDrive continue to maintain their lead in the library ebook market, and they have over 15 thousand  partner libraries sharing thousands of ebooks and audiobooks everyday. Patrons can read and listen on their PC, BlackBerry, Android, or iPad.

But OverDrive won’t be the only game in town for much longer. 3M are working on their own competing platform, and early reports on the beta testing are quite positive. The 3M Cloud Library is intended to go head-to-head with OverDrive, and it can go one better. 3M have also designed the platform so it can lend the ebook readers as well as the ebooks, and let the library staff manage them from the one portal.

Baker & Taylor also launched a library ebook platform this year called Axis 360. it’s being launched in close partnerrship with Barnes & Noble and is intended to work with the Nook ebook readers. It’s still under development though, but it’s going to launch with titles that Baker & Taylor currently distribute through Blio.