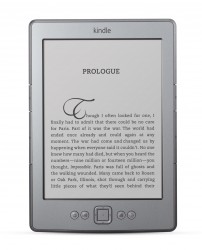 The first non-US retailer to carry the K4 just announced that they have it in stock and they are ready to ship.

I’m sure you know that in the US, you can find the Kindle at Best Buy, Target, Staples, Walmart, and other stores, but outside of the US is another matter. This is the first retailer to cross my radar with news that they were carrying the new Kindle.

This is the new budget model that was just announced about a month back. It loses the keyboard, speakers,  and headphone jack found on the K3, and that saves you (in the US) $30. I have a K4 (as well as a K3 and a K2-US) and I’m not sure it’s worth the trade.

Dick Smiths have it listed for $139 AUD,   Whoops. Turns out I was wrong and GST was already added. y mistake was that it was mentioned in the checkout process but had already been added.  I didn’t look closely enough.

BTW, they’ve also been selling the K3 for some time now; it’s priced at $20 AUD more than the K4 and given the extra hardware that’s really not a bad price.

P.S. Just out of curiosity, how much does the Kindle cost if you order it direct from Amazon and have it shipped to Australia? I’d like to know what the import duties add to the price.  they might justify Dick Smiths’ markup. Update: I’m told (via Twitter) that the K4 costs $119 AUD from Amazon.

P.P.S. If you know of another retailer with the K4 in stock, please let me know in the comments.