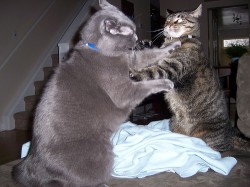 The 2 major US ereader makers are once again squabbling like school children. This is the second round of squabbling, and it looks to be as entertaining as the earlier fight back in May of this year.

Do you remember what happened back then? Barnes & Noble launched the Nook Touch, and one of their selling points for the the Nook Touch was that it had 2 months battery life and how that was better than the 1 month battery life that the Kindle had.

Naturally, Amazon felt that they had to respond and they did so in a less than optimal manner. Since they couldn’t actually improve the battery life on the K3, they instead fudged the details on the product listing. Rather than having an hour a day for a month, Amazon decided that the K3 could be read for half an hour day for 2 months.

B&N responded to that with the best smackdown. According to B&N’s testing, the Nook Touch could be read for 150 hours and the K3 only for 56 hours. That pretty much ended that fight, pity. I thought it was quite entertaining.

Today’s squabbling isn’t over battery life. Amazon chose to fire back at B&N over retail locations. You see, one of the key points of yesterday’s presentation was that the Nook devices could be bought in any of 700 retail locations. Got a problem with your Nook? Just visit a B&N store and someone will provide technical assistance. Also, B&N were also careful to point out that Amazon couldn’t make this same claim.

Now, B&N made a number of good points about their retail locations, and there really isn’t anything Amazon can say to counter it. But Amazon still cannot let it go (much to my delight). So they put out a press release today. They want to make sure that everyone knows that the new Kindle family will be available in 16 thousand retail locations in the US come 15 November.

Amazon.com today announced that over 16,000 stores across the U.S. will be selling the new Kindle family starting November 15. Customers will be able to visit any Best Buy, Target, Walmart, Staples, Sam’s Club, RadioShack, Office Depot, as well as several other retailers, to experience and purchase the $79 Kindle, the $99 Kindle Touch, the $149 Kindle 3G and the $199 Kindle Fire.

Unless you look at it as a response to B&N, there isn’t much of a reason for this release. Yes, everything in it is factually correct, but it’s not news. And that’s why I think Amazon is responding to Barnes & Noble.

I’m not sure how B&N will respond, but I bet they have something planned. Their response back in May was too well coordinated, and the presentation yesterday was carefully crafted to criticize Amazon. I believe B&N have the next volley ready, and they will return fire as soon as they get a chance.

On a related note, I haven’t made a big deal of it but both Sony and B&N are now referring to their ebook readers as not having annoying ads (like on the ad subsidized Kindles). B&N even went so far yesterday as to point out the the Nook Touch was priced the same as the Kindle Touch – only without the annoying ads.

I never liked the sleight of hand Amazon pulled on the pricing, so watching as it backfires on them is quite fun.