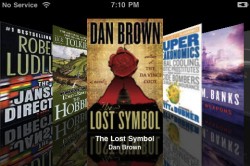 A reader has just tipped me to some great news. It looks like all that doom and gloom over the death of Stanza last month was a little premature. Amazon pushed out an update for Stanza today, and now it finally works under iOS5.

Unfortunately, I’ve also just read that the new version of Stanza is broken on iOS4.3. So don’t install it until after you update to iOS5.

I’ll admit that I feel a little foolish for proclaiming Stanza dead, but it’s been nearly a month since iOS5 was released. Everyone else had their apps updated before iOS5 was released, and so far as I could tell Stanza wasn’t even under development.

I happen to know that there were a number of complaints about Stanza and the iOS5 beta release, and when I wrote about them back in August there was no response from developers. If someone had said that they were working on it, I would have waited.

You probably know that Stanza used to be the great reading app for iOS. Back when the app was released in late 2008, it was quickly hailed as one of the first great successes of the platform. It was widely regarded as a breakthrough app that introduced a significant number of readers to the idea that they can read on their smartphone. The app was so good that I believe Amazon bought Lexcycle just to make sure no else snapped it up (Apple, maybe). Ever since they bought the app their support has been lackluster, and you can see that in the delayed release of the latest update.