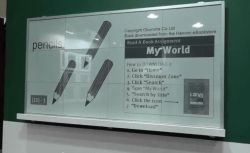 The screen tech conference FPD 2011 wrapped up last week in Japan, and E-ink was there to show off the latest products to use their screen tech. This video is definitely worth watching; it shows a number of different products based on E-ink screens, including a couple that I had heard about but had not seen yet.

Take the whiteboard at right, for example. That’s made up of multiple smaller screens and it acts as a digital whiteboard. This is a working demo, too, but if you want to see it in action you’ll need to watch this other video here. It is very cool.

Near the end of the clip there’s an example of a display that doesn’t have a battery and is designed to work with an RFID signal. I’d heard of this example before but this is the first time I’ve actually seen it in action. There’s also the segmented display that could be used for road signs; it’s made of hundreds of small square E-ink panels, and each has an LED built into it. Since the E-ink panel is perfectly viewable by day the LEDs are only used at night, and that reduces the energy cost of the sign.

The watches are also cool, but I bet most have seen them before.

BTW, you might be interested in the collection of E-ink demo videos I posted earlier this year. Would it surprise you that E-ink have printed their screens on paper and Tyvex? It’s quite cool.