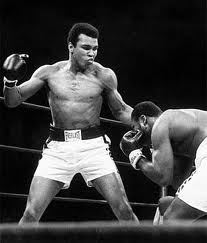 It looks like Kobo wanted to tie up all loose ends before being bought by Rakuten earlier this week; they’ve worked out a settlement with Muhammad Ali over the trademark unpleasantness from this summer.

You might recall that back in July Muhammad Ali enterprises sued Kobo over a full page ad that they took out in the NYTimes. Kobo had used Ali’s name and slogan to promote the new Kobo Touch when they launched the ereader back in June. His name was prominently featured below his iconic saying “Float like a butterfly, sting like a bee”, which naturally did not please Mr. Ali.

The terms of the settlement have not been released, but according to a filing made earlier this week, the 2 parties have ended the lawsuit. Neither party wished to disclose how it was settled, but it appears that both are satisfied with having resolved the trademark and publicity rights issues of the lawsuit. According toone of Kobo’s lawyers: “The parties have reached a settlement in principle and we’re working on documenting that,” said Meaghan Crowley of Reed Smith.

It’s pretty normal for a settlement to be kept private; no one wants to disclose possibly embarrassing details. And that is doubly true when one company is bought later the same day.  The Japanese retail giant Rakuten announced on Monday that they were going to buy Kobo for $315 million, and I do wonder how much of that was diverted to settle this lawsuit.

Toronto-based Kobo had been primarily owned by Indigo, Canada’s largest bookstore chain, and they had been working hard to expand internationally against Kindle and B&N.  The’d just launched a new tablet, the Kobo Vox, priced at $199.