Games Could be the Secret Weapon on the Kindle Touch (K5) 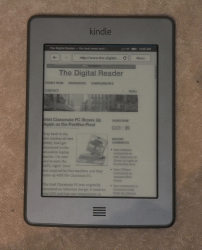 So I’ve had my K5 out of the box for a couple days now and I thought I’d post some first impressions. It’s an okay device, but it’s a little thicker and heavier than I expected.

But it also has a solid feel to it. My lighter ereaders (Sony Reader Wifi, K4,) felt like I needed to hold them gently, becasue they were fragile. Not so the K5.

It has a nicely curved back, with 2 speakers on the lower edge. As you can see from the picture, it has just the one (home) button on the front below the IR touchscreen.

While the hardware is appealing, the software isn’t.

After spending several days with it, I cannot say that Amazon put any real work into the menus on the K5. Sure, they were adapted so they would work better on a touchscreen, but the K5 doesn’t do anything you can’t do on the previous Kindles.

The web browser is the same one as on the other Kindles, and it’s nothing special. But I have to say that I’ve been spoiled by the browser on the Sony Reader Wifi, which is running the stock Android browser. (Naturally it’s better.)

But at least the touchscreen is both responsive and easy to use. I didn’t have any problem turning the page with either hand. In this one way Amazon did think ahead for lefties might want to hold it.And it supports pinch-zoom, both in the web browser and in some of the games.

Yes, the pinch zoom (and scrolling) works in games. I already have one game in particular that supports these features. It’s Hidden Expedition: Amazon, a hidden object game. On each level you are presented with 6 items to find on a cluttered background. This game wasn’t much fun to play on the K3 or K4 because they don’t have touchscreens.

But the K5 does have a touchscreen, and after playing HE for a while I can see that it was designed for the K5. I can zoom in and scroll around the screen while looking for the items. It’s actually a fair amount of fun.

BTW, not all games work on the K5. I haven’t done a comprehensive check, but generally if the game must have a keyboard it won’t run on the K5.

But that’s okay because some games actually improve on this ereader. I’ve also downloaded a few games, and I think this could be the K5’s killer feature.

Mahjong Solitaire is a lot easier to play with a touchscreen, and the same goes for dots & boxes. Thread Words is also fun, but I’ll admit that I never tried it without a touchscreen.

The K5 will appeal as a game platform for the same reason a smartphone works. It’s always with you.  For once I’m going to pitch a  product instead of just discussing it. If you have the K5, go buy these games. They add value to the K5 (and 2 of the are free).

When the many Kindles were announced in late September, I had to wonder what Amazon was planning. My K4 arrived right away and I noticed that not all games worked on it. I wondered if it was a good idea to split a platform into multiple pieces like this.

I’m still not sure it’s a good idea, but now I can see that they’ve been planning it for a while.  Some of these apps work so well on the K5 that I have to assume that the developer had the K5 in hand and tested the app before it was released. And in the case of Mahjong Solitaire, that would have been over a year ago.

And Amazon managed to keep the several Kindles a secret for all that time. I know Amazon likes to keep a secret but that is impressive.

Story Surgeon is a New Type of Fair Use, Not Copyright Infringement

I agree with you on the menus; I find the menus on the Kindle Touch both awkwardly placed and confusing. I’ve owned every Kindle device except the K4, and the Touch took me a while to warm up to. I finally decided that I was happy enough with the positives to give my Kindle Keyboard to my daughter, but it wasn’t love at first sight. The others were. The Kindle 1, despite all its ugliness and flaws (and price!) was worth it, the K2 was a significant upgrade, and Kindle Keyboard was pleasurable from the beginning.

I’ve never played any games on the eInk devices; maybe I should check them out.

I have the Nook Touch but don’t feel like it is that delicate of a build the way you describe. It has a lot of rubber and the turn page buttons on the sides are even rubberized. It won’t take a beating like my Sony 650 will! I don’t have the new Sony but that hard plastic shell does feel delicate.