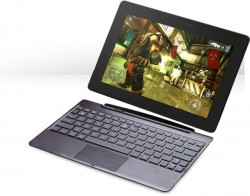 Asus’ new Android tablet isn’t due to hit store shelves for another few weeks, but the review units have already shipped. I’ve found 8 reviews so far, and the opinions have been mixed.

The Asus eeePad Transformer Prime is the most powerful Android tablet on the market. It’s the first to use the 1.3 GHz NVIDIA Tegra 3 quad-core  CPU, which it’s using to run Homeycomb. It uses a 10″ IPS+ screen similar to the one found on the current Transformer, but virtually everything else has changed. The Prime is thinner, and the rear camera have been upgraded to 8MP with an LED flash. The front camera is still 1.2MP, though. Flash storage  is also getting bumped, with the base model now sporting 32GB.

This is their second gen model, and like the first eeePad this tablet is a hybrid model sold ion 2 parts. The optional keyboard (which I highly recommend) adds battery life, more ports and slots, and turns the eeePad into a full-fledged netbook.