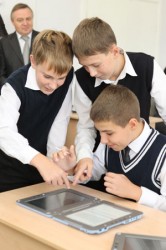 There’s a certain theme in Cold War spy novels where a character dies only to turn up later working for the Russians. I just got to watch that theme play out in the gadget world this week.

A few days ago I posted on a multi-device pilot program going on in Russian schools. They’re testing 4 different gadgets over in Russia with the goal of picking one and issuing it to all students. I wrote that post just because I thought it was neat (and because no one else could), but I also wrote it just to see what response it would generate.

Within a couple hours a reader told me that I had missed another pilot program. That fifth pilot isn’t being run by the Russian Ministry of Education, and that’s why I didn’t hear of it. But the Entourage Edge is being sold in Russia, and it’s going for 22,000 rubles (~$710 USD).

I had to get help on this, so I reached out to Igorsk (I know him via MobileRead). He turned up a couple articles, background info, and this: 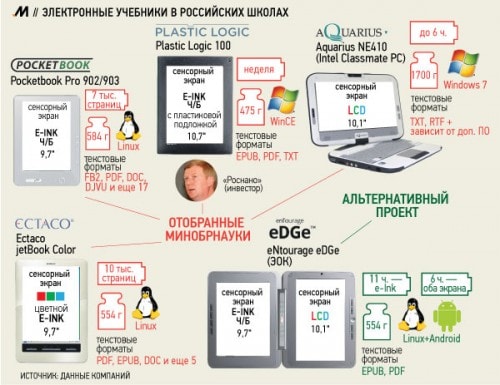 As you can see, 4 of the gadgets above match what I showed you earlier this week, and the fifth is the Entourage Edge. I have more detail than this, but I like the graphic. It pulls together all 5 gadgets. 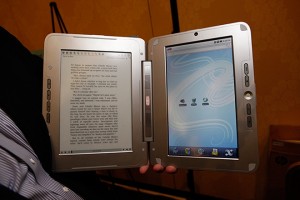 Given how long ago it died, I should probably offer some background detail. Entourage launched the Edge dual screen tablet in Fall 2009, and it was the hit of CES 2010. It has a 9.7″ E-ink screen and a 10.1″ LCD screen. Both sides had touchscreens and it had Wifi, Bluetooth, and ran its own custom reading app on top of Android v1.6.

Entourage released a second model in late 2010 called the Pocket Edge, with a 6″ E-ink screen and a 7″ LCD screen.

I was surprised to read that the Entourage Edge was still being sold in Russia because the company had ceased operations in early 2011. At least, that’s what I thought. You might not have noticed the demise of Entourage, but I’m sure you noticed that the Pocket Edge kept going on clearance. The price eventually dropped to $80 as the warehouse was cleared out.

But there was one detail from the death of Entourage that I should have noticed, but I don’t think anyone did. Only the Pocket Edge went on clearance. The larger Entourage Edge didn’t, which should have raised a red flag. Where did those units go if they’re not on clearance? (Russia, obviously, but we didn’t know that at the time.)

I had good contacts with Entourage before it died and I got to watch the company shrink. I was passed from one email to another as people left.  There were a couple issues I wish I had raised at the time, but I didn’t want to bother the remaining staff while they’re struggling to stay the remaining staff. I was happy just to get the Edge support forums copied over to MobileRead before they were deleted.

But now we know the Edge is still being sold by Akademkniga/Uchebni, a subsidiary of the academic publisher Nauka. The Edge has been on the Russian market since at least September 2010, and it was probably available before that. The details aren’t completely clear, but it appears that the Edge had been tested in pilot programs in 10 schools last year. After Entourage folded, I’m told that Akademkniga/Uchebnik bought the IP and is still having the Edge made in Malaysia.

There’s even a bunchaton of news stories about the Edge and how it’s being used in some schools (including current articles). It’s selling for 22,000 rubles, which is about $710 USD. If Entourage had been able to sell it for that price here in the US I think they would still be around.

I’m still looking into this myself, and I will update with more info if I find anything interesting. There’s probably enough material here for a whole other post on how well the Edge is doing in Russian schools.