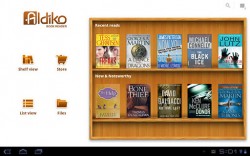 My second favorite Android reading app was just updated today, and it’s worth a look.

Aldiko just posted a major update to their reading app. The new version is much better designed for a large screen tablet. Look at the screen shot at right and then try to picture it on a 10″ screen. The older v2.0 app was designed for small screens (5″ and under) and wasted a lot of screen real estate on 7″ screens and above.

The general reading experience is the same. You still have all the formatting options you had before, which is part of the reason why I liked this app. I like my ebooks to look exactly one way and Aldiko can help me do that. It still as support for Adobe DE DRM, Epub, PDF, and it still has the Aldiko ebookstore. I prefer to get my ebooks elsewhere, but I have to admit having the ebookstore there is a nice backup.

The new release is currently available only as the paid app (I finally bought it) and it requires Android v2.1 and above.  The free version will eventually be updated and so will the copy in the Amazon Appstore. And now that I have both the old and new version, I really think the new one is worth paying for just to get it sooner. It’s a lot nicer to use. But you should also pay for it just to support the developers.

BTW, Aldiko is not my favorite Android reading app any more. I’ve come to prefer CoolReader. It was put in front of me on a loaner tablet and it’s grown on me. You can find CoolReader on the project page or in the Android Market.