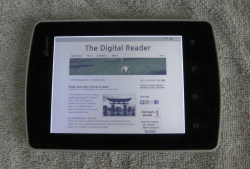 It’s been just over 2 years since Qualcomm first started showing off the Mirasol screen, and a little over a month since the first Mirasol equipped ereader hit the market.

And today I have one in my grubby little hands and can finally post a first hand review.

I’ve been looking forward to the screen on this device for over a year now, and I find it difficult to express how disappointing the actual device is. Yes, the screen tech is very cool, but the device wrapped around it does not live up to the hype that Qualcomm generated over the past couple years.

This is actually my second post on  the Kyobo Mirasol eReader, and the first was more of a how-to guide. There are a number of details on this device’s abilities that I haven’t repeated here, so I suggest that you go read that post as well.

I’m also going to cover the screen tech in a later post because I feel that the device itself deserves its own discussion. 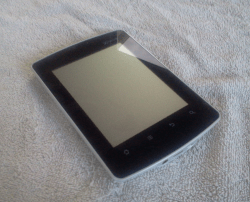 The Kyobo Mirasol eReader runs Android v2.3.5 on a 1GHz Qualcomm SnapDragon CPU, but it is most definitely an ereader. It’s not a tablet, and just to make sure it stays that way you are blocked from installing apps. While I have not made any strenuous effort to bypass the block, all the obvious tricks did not work.

The screen measures 5.7″ and it has a capacitive touchscreen. It has Wifi, of course, but it also lacks any accessible internal storage. If you want to load your own ebooks you will have to get a microSD card. 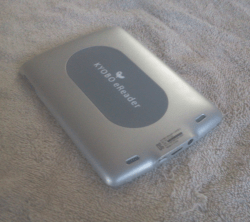 There’s a power button and microphone on the upper edge, and on the lower edge is the headphone, microSD card slot, and USB. On the lower back of the device are a pair of speakers. It also has a set of notches on the upper and lower edges that I believe are intended for a case.

I wish I had the case, because the back of this device is smooth. It’s not easy to maintain a good grip (without having a thumb on the screen). I’ve found I cannot use it one handed. The Kyobo is noticeably heavier than any of my 6″ ebook readers, and I have to be careful how I hold it so I don’t drop it.

One of the key selling points with the Mirasol screen is that it is a low-power alternative to LCDs. Unfortunately, the Kyobo eReader is an example of how battery life depends on more than just the screen. The CPU, software, and general hardware design is almost as important as the screen tech. This is doubly true with any device using a low-power screen; the rest of the device uses a greater proportion of the battery power and a poor design can negate any savings from the low-power screen.

I’ve only had this device for a week, but based on how the battery is dropping with only light usage (with Wifi on) I am going to estimate that actual battery life is not much more than 2 weeks. Clearly that is far less than a number of ebook readers, and it’s also not much more battery life than some of the better tablets.

Kyobo blocked a number of tablet features on this device, so you would think that it would at least be a good ebook reader, right? Well, no, it’s not.

Also, the reading app crashes often. It kicks me out to the web browser, which is a little strange. I’m guessing that I end up at the browser because there’s no actual home screen. Note: this stability issue might be useful for hacking the Kyobo eReader.

I cannot get it to load DRMed ebooks. I tried repeatedly to authorize this device with Adobe DE, but the app never noticed it. While I have an extensive library of DRM free ebooks, I still feel that DRM support is one of the minimum requirements for an ebook reader – especially one that costs $300.

To be fair, I’m not sure that the DRM is a valid complaint. No one ever claimed that the Kyobo could support Adobe DE DRM. But you have to wonder why it doesn’t; that’s the dominant Epub format.

Next, this device does not properly support Epub. Yes, the spec lists PDF and Epub, but the reading app does not display the CSS correctly nor can it find the external TOC in an Epub. It also cannot use an internal TOC because it’s not configured to let you click on a link.

And the reading features are quite limited. It has a landscape mode for both PDF and Epub, which can be triggered by the g-sensor or locked in one position. I can adjust the font size or set bookmarks, and that’s the limit of the actual functional features. I can also theoretically search for a word, look it up in the dictionary, or use TTS, but none of those features work for me. The search does not work, the TTS is crap, and the dictionary is in Korean.

PDF support is also lacking. There’s no reflow mode nor any set zoom levels (fit to text would have been nice). You can zoom using a inch (and you can scroll around a page), but it’s incredibly sensitive. It was very difficult to get it to zoom to any specific level.

The reading app is exceptionally disappointing. While I could forgive the latter several broken features, this app fails at basic abilities like DRM support and properly displaying ebooks. These are the kind if mistakes that you do not make with your flagship product.

The video abilities of this ereader do not make up for the poor reading app.

Like I said in my getting started post, this device doesn’t have a video app. That means there’s no way for you to play the demo videos that Cheryl Goodman showed off for NetbookNews. To be honest, I think the video app was left out deliberately. But lucky for me this device is using a standard Android web browser so I was able to watch Youtube.

I wish it had been blocked.

This device has a slow refresh rate for video, and the refresh rate is most obvious with higher resolution videos. It’s so slow that I could often see it pause after refreshing 2/3 of the screen and then the rest would update. Also, it has an annoying screen wipe when the scene changes in a video. And when the camera view scrolls to one side, it’s jerky.

These problems are likely due to a crappy graphics driver, but it boggles the mind that anyone let it happen.

In fact, now that I’ve seen it in action, I can understand why this device was locked down. If this ebook reader had been released as a tablet then there would be shrieks of horror from almost everyone. The video abilities are that bad.

I’ve carefully left out details on the screen tech and focused this post on just how well the Kyobo eReader performs as just an ebook reader. While I do lust after the screen tech, I felt that the rest of the device deserved its own review.

This is a most unsatisfactory ebook reader. It’s not only limited in features, but it is also unstable and less capable than most tablet or ereaders in its price range. There are many devices on the US market that offer a better value, and that includes both tablets and ebook readers. I would get one of those.

But if you’re lusting after the screen tech, I’d still wait for a better device. I freely admit that I bought this just to see the screen, but I regret that. I wish I had waited for the next model. It’s bound to have better performance.