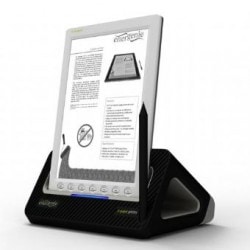 A couple readers asked me if anyone was working on a large screen at CES, and it looks like at least one escaped my notice.

A Dutch company called Gembird was at CES, and they showed off their new print-to-ereader tech. They’ve developed a new 9.7″ E-ink ereader with docking station, and it’s targeted at the business user who wants to cut down on printing content.

I don’t have full details on the device, but I do know that it is running Android on an 800MHz Freescale CPU.  It has a touchscreen but no wifi. And according to Tweakers, a Dutch gadget blog who did see this device at CES, the dock isn’t required. It’s going to hit the market in April, and the expected retail is 500 euros.

So the idea here is that you’d plug in this ereader to your computer. It would show up as a USB printer, and that would give you the chance to print docs to the device, enabling you to reduce your paper usage. You could then edit the doc on the device and (maybe) send the edited PDF back to the PC.

I cannot find specifics on what happens after you edit the doc, but I really hope that Gembird closed the loop. One detail that most ereader makers fail on is how to get annotations off the ereader. Being able to share an edited PDF is twice as useful as simply editing it.

Gembird  has a great idea here, but do they really have to throw a €500 ereader into the deal? I think there would be a much better value to find a similar ability that utilizes the iPad or other existing tablets and ereaders.

In fact, there already is an option. Goodreader lets you edit PDFs on the iPad, and you can even email or print the PDF after you’ve edited it.  I’m not sure on the best way to get them to the app (email seems like a good bet), but this is still a better value.

Does anyone know of a similar app for Android? In particular, I’m looking for the ability to receive, edit, and then share PDFs. I bet at least one app already does this, but I don’t know what it is.