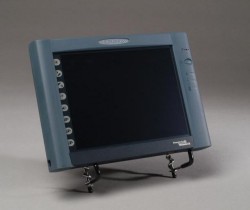 All this recent talk about sunlight readability inspired me to go pull another tablet out of my collection. This one is over 12 years old, and it’s a shock to see how much the market has changed.

In today’s world you can buy any number of Android tablets cheap. But it only a couple years ago you couldn’t buy them for love of money because they weren’t available; they simply didn’t exist yet. So there were a fair number of tablet owners who went looking for older refurbished equipment and we made do with what we could find.

Editor’s Note: This post is part of an ongoing series called Blast From the Past.

This is a thick and sturdy tablet that was originally designed for industrial and institutional uses. Weight is just over 2 pounds, and ti comes with an excess of ports and card slots. It has 2 PCMCIA card slots on the upper edge as well as an IR port and a modem. On the right edge are an old PS2 keyboard port, USB host, 9-pin serial port, and headphone and microphone jacks. There’s also a built in microphone and speaker.

Inside the case is a reasonably powerful mobile device (for the day and for the price). It has  an 8″ DSTN LCD screen with VGA resolution, 8 Megabytes of Flash storage, and it’s running Windows CE 2.11 on a 131Mhz MIPS CPU. (Good ghod that thing is old.)

Aside from the screen and CPU, it actually has decent set of ports and card slots compared to most modern tablets. (How many Android tablets have USB post, much less a mike?) Those 2 PCMCIA card slots could take adapters, thus offering access to a number of different card types as well as a number of plug in attachments (scanners and sensors). The PenCentra 130 also appears to have had a dock, but I’ve never actually seen one.

It shipped with a decent (for 1999) office suite, so take that, Android. It also had some basic utilities but not much else in the way of apps. I recall installing a few games as well as Mobipocket 4.8, which I used to read my DRM free Kindle ebook collection. The PenCentra was also supposed to support  PDF app and a Wifi driver, but I could never get them to work.

I bought this device back in 2008, long before even the Kindle DX had been announced. In those days your only choice for  large screen ereader was either the Irex Iliad, expensive tablet PCs, or old refurbished gadgets like the PenCentra.

BTW, do you know how I’ve been looking for  sub-$100 media device recently? Well, that quest is a lot older than you might guess.  I got the PenCentra for less than $50.

I have the device on my desk but I seem to have misplaced the power supply, so I’m not sure if it still works. But I can recall what I thought of it.

I used the PenCentra for just over  month, including a couple touristy day trips up to DC. The screen worked acceptably well inside, and when the front light was turned off it also worked okay outside. I used it at least once while waiting in line at the Washington Monument – outside.  BTW, that reminds me of another thing that has changed since 2008; ereaders were so rare then that lots of people asked me about mine (including while I was reading – I hate that).

I eventually set this tablet aside because of the touchscreen. I’m not sure what tech it used, but I do know that this touchscreen did not like fingertips. I had to click on it with either a stylus or my fingernail. And since there were no page turn buttons, the awkwardness of the clicking eventually got in the way of the reading experience.

BTW, I don’t consider the touchscreen a defect; if I was in the habit of writing on the PenCentra then I would like the fact it would ignore my hand on the screen.

I have an ulterior motive for this post.  In the next few months Sol Computer is going to release several expensive tablets. The high cost will largely be due to the Pixel Qi screen.

While some will criticize the tablets simply because of the cost, I decided to dig up another older niche product. The tablet above was also similarly expensive and it was designed to fill much the same need. It’s an example of the kind of tradeoffs you make with devices.

Right now Pixel Qi screens aren’t being used for the consumer market. They’re only being used for certain niche markets where the cost is outweighed by the benefit. This is not a deficiency; lots of devices including ebook readers went through a similar phase.

The original Kindle sold for $400 at launch. By no stretch of the imagination was that cost justified by the obvious features and benefits of the device. Lots of people bought it anyway, but don’t kid yourself about the value it added. The early adopters were one, fans, and 2, those for whom the weight savings were worth more than the cost.

Similarly, the early adopters of the Pxiel Qi are the fans and those who need daylight readability.  And that is why we shouldn’t bitch and moan about the price.