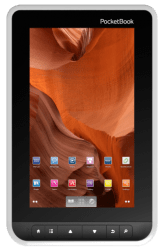 Pocketbook is finally ready to tell us about the 7″ tablet that I uncovered last month, and the press release has confirmed much of what I already knew.

The A7 is the smaller sibling of the A10, Pocketbook’s 9.7″ tablet. It’s running Gingerbread on a 1GHz Texas Instruments TI3621 CPU with 2GB Flash storage, Wifi, microSD card slot, g-sensor, and a speaker. It’s using  high resolution (1024×600) screen with a capacitive touchscreen. Weight is around 400 grams and battery life is estimated at 6 hours.

This tablet ships with Pocketbook’s own reading app, which supports Epub, PDF, FB2, txt, DJVU, RTF, HTML, doc, and docx. But it is also running Android, and that means that you can install other apps, including Kindle, Nook, or what have you.

The spec sheet suggests that the A7 will ship with a media player, but there is no mention of the Android Market. It’s also going to ship with Office Suite Pro v.5, CoolReader, as well as 47 different ABBYY Lingvo dictionaries that will help to define the meaning of foreign words while reading.

There’s no mention of price or release date, and my sources t Pocketbook declined to speculate. So at this point we don’t know much more than we did last month.