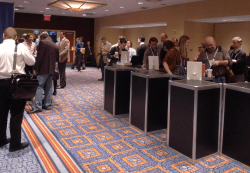 So I’m back home from NYC, and that was an eventful trip. I met with  bunchaton of people, sat in a few interesting sessions, and coughed  lot (the only times when I don’t get sick on trips is when I bring it with me from home).

The petting zoo was on the last day, and it was a mixed success. I didn’t get the press attention I was hoping for, but the conference  attendees loved it. A lot of people came by and played with the tablets and ereaders on display.

Ectaco showed up to demo the new Jetbook Color (my review is coming). Qualcomm sent someone to show off the Kyobo Mirasol eReader. The jerks at Inkling also sent someone to show off their iPad app. I was almost tempted to boot him from the event; if Inkling doesn’t want to include me in their media events then I don’t want them in mine. But I didn’t because I figured people would be interested in the app. 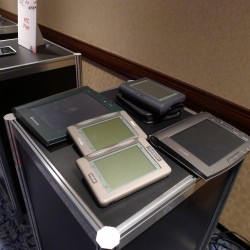 From my viewpoint, there wasn’t that much of interest. I own one of almost everything on display, so if I wanted to play with one I could just go get it out of the box.

Still, it was neat to see people interested in the Skytex and E-Fun tablets. There was also a lot of interest in the lesser known devices like the Samsung E6 and Onyx Boox ereaders. And the antiques drew a lot of attention. People kept picking up these 8 and 9 year old devices while marveling that they still worked and offered features nearly as good as the current top of the line ereaders. 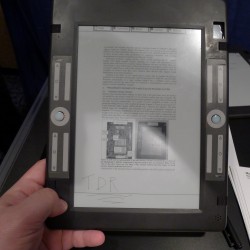 And then there’s this beauty at left.  That is one of Nick Chen’s multi-screen cooperative wireless ereaders. They’ve been blogged about extensively, but I had always wanted to see them in person. I got to play with them for a while, and that really made my day.

These were research units, not production models, so they were rather flimsy and kludged together from other devices. They’re based on 9.7″ E-ink screens, but the Wacom touch screen component was salvaged from some Toshiba laptops.

The controls on the ereaders look complex, but the functions were kept simple for the exhibit (so as not to confuse people).  It was fun to see Nick use one screen to select a document and have it open on the ereader I was using. We could also share single pages and annotations. Recently, Nick has also enabled the ereaders to backup the annotations to Dropbox, thus giving everyone a new way to collaborate.

All in all, that was a good event, and I am looking forward to the next one. Details are still up in the air, but I plan to partner with someone and hold the next Zoo at the same time as Book Expo America (early June). Assuming that one goes well, I’m also considering having a digital comics oriented digital petting zoo at the NY Comicon.