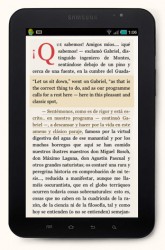 I’m at an education conference today (CoSN 2012), and by some strange luck I got an email this morning from a service that my fellow attendees thought was rather neat.

DoppleText has come up with a new way to do sentence by sentence translations. It looks a little confusing at first, but once I got past the initial weirdness it started to make more sense.

If you’ve used translation services before then you’re probably used to seeing the text in 2 languages in 2 columns. Or you might be used to using Google Translate, where the source appears when you hover the cursor over each sentence.

DoppleText does something different. They take the source and, one sentence (or fragment) at a time, they insert the translated piece as a window next to the relevant piece of the source text. (It covers up other parts of the source text, and that is slightly confusing.) Each source segment is highlighted as it is being translated, and you can advance through the text with the arrows keys.

The service launched back in October (in German), with the English language service launching in January. Right now they’re offering just a few pd titles, and they’re using professional translations to provide the second text. But DoppelText is also planning

You can read the texts in the browser, but you can also download them and read them as interactive Epubs in iBooks or calibre (according to Doppeltext). I’m told that this is dependent on JavaScript, which means that these ebooks might work elsewhere. These ebooks will even work on the K3’s web browser, but it requires keyboard shortcuts so it might not work so well on the later models.

If you’d like to check it out yourself, there’s a number of free excerpts as well as a free Epub you can download. As for me, I’m not all that interested. It’s interesting on a technical level, but I used it and I found it to be too confusing.

I also think that going sentence by sentence is the wrong approach. I look at translated content all the time (web, not books), and I have found that I get the most value when I look at the text a paragraph or more at  time. I’ve found all too often that authors don’t finish a thought in a single sentence, and to really understand them you need to look at larger pieces of text.