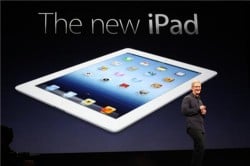 Apple is just now finishing up their event, and it turns out that all the many iPad parts leaks over the past couple months were true. The new tablet is about the same size and shape as previous models. It has both a higher res screen and a bigger rear facing camera (5MP). Apple’s talking about the A5X chip (dual-core CPU & quad-core  GPU).

The new iPad is also going to have a limited version of Siri which will support dictation in US English, British, Australian, French, German and Japanese. Big Whoop. My Samsung Glxy Tab can do that and it came out in 2010.

There’s been no earth shattering news so far, so I’m going to head back to the conference.