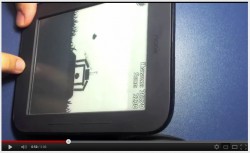 A few weeks back I posted about a Nook Touch hack that enabled a partial refresh mode. As you could see in the demo video, the refresh rate was almost fast enough that it could he used as a tablet.

The work on the hack never stopped, and yesterday someone posted a new demo video. The hack can now change the contrast of the E-ink screen, ie it can make the screen seem whiter or darker. That’s worth more than you might think, but you might have to be using an E-ink device as a tablet to see the value.

One thing I’ve noticed on my Sony Reader Wifi is that some apps, particularly ones with dark color schemes, don’t look good on the screen. This hack fixes that issue for the Nook Touch (I really need to try it on the Sony Reader Wifi).

Attention B&N Folks: Do you want to know something that’s funny about this? I was at the Nook Tablet launch, and I distinctly recall your boss saying that there was no value in making the Nook Touch be more than an ereader. I’d say that the video above proves him wrong.