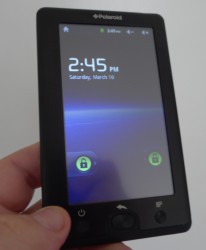 Polaroid is making a big push into tablets and ereaders this year, but it looks like they’re going to go for the cheap stuff.

This particular model is a budget device with 4.3″ screen. It’s running Android 2.2 on a 1GHz Rockchip RK2818 CPU. It has 4GB Flash, a microSD card slot, Wifi, speaker/mike, and a g-sensor.

This review is based on owning the PMID4300 for a week and taking it on a conference trip. I have found that a con trip is the best way to focus my attention on a new device. I try to use the review unit in place of the  tablet I usually carry (Samsung Galaxy Tab) and this gives me a good idea of how well a review unit performs.

This review is also an expansion on my first impressions post. After looking over that post, I’ve decided not to repeat what I wrote there.

I liked holding the PMID4300. It was a little thick, but it was just the right width so I could hold it in one hand and page forward with my thumb. It worked fine both as a media player and an ereader. My several sample videos played okay and so did my mp3s.

The screen was a tad too dim to be read outside  in Philly in March, though, and the speaker is rather quiet. But this is a budget device, so I’m not surprised.

Like I said before, the stock apps (gmail, browser, youtube, etc) worked fine. That’s good, because I had trouble installing apps. I did get the Amazon Appstore to work, but the Kindle app won’t run. Another owner has commented that he has also had problems installing some apps. For example, he installed Adobe Flash just fine but a Flash based educational game still wouldn’t work.

Luckily for me this device ships with Kobo, so it’s not a major issue. Also, I was able to install Aldiko, so clearly some apps will work.

This is the all important category for mobile devices, and it’s really the only one where the PMID4300 comes up short. It’s a cheap device, and the battery life reflects that. I found, when I took it on a trip, that the effective battery life was under half a day.

The issue wasn’t the battery so much that the touchscreen becomes erratic and unusable when ever the battery meter drops below 50%. And I usually hit that point before lunch on my trip.

Now, you might say that the battery life is fine, considering the cost ($60), but I need to have it last most of the day. I had planned to carry this around in my pocket as an MID and basically use it as a small tablet. I was going to use it to check email read, and do other minor tasks. But I cannot. If I did carry this device around I would have to carry 2 just to make it through the day. That’s simply not enough.

Aside from the battery issue and the problem with installing apps, this is a decent device for what it cost ($60).