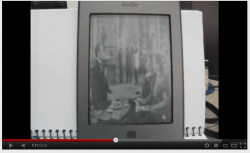 The Nook Touch can do a fast refresh (and even play video) and the Kobo Touch can play Tetris, so today’s news that the Kindle Touch has been hacked to play video probably shouldn’t come as a surprise.

An enterprising hacker has posted an early demo video. There are no details yet on when it might be available to the average user, but this is still a really cool bit of news.

Update: The hacker posted several new videos. This one is much better quality than the first, and as you can hear the audio is now working, too.

The frame rate of the video doesn’t appear to be quite as high as that of the Nook Touch video, but I’m not sure.  On the other hand, the resolution of this video is clearly higher than the Nook Touch demo and it has audio.

Pretty soon you’ll be able to throw out your tablet and carry around just an E-ink ereader. Who needs color, anyway.